Evolution of the House Plan in Europe: from the Industrial Revolution to the Interwar Period

The introduction of new techniques and materials, along with innovations in indoor plumbing systems, resulting from the industrial revolution, paved the way for vertical living. Investigating specifically a period of time where a flux of population was driven to cities, and social class divisions were being questioned, this article looks back at the evolution of the house plan in Europe between 1760 and 1939.

Tackling the transformation of the housing unit during the industrial revolution all the way to the interwar period, this feature highlights four prominent examples that rethought traditional layouts and responded to the challenges of their time. Still influential today, the mentioned models, restored for use, happen to be part of the 21st-century urban fabric. Located in London, Paris, Amsterdam, and Moscow, the plans showcase the ever-changing interior wellbeing standards, directly linked to a broader metamorphosis, equalizing and providing for growing urban populations. Discover the evolution of living units from the Back to Back Houses to the Garden Cities of England; the Haussmannien Block, a Vertical Living for a Modern Bourgeoisie; the Extension of Amsterdam, from Alcove Housing to Social Housing Blocks; and the transition Type House in Russia. 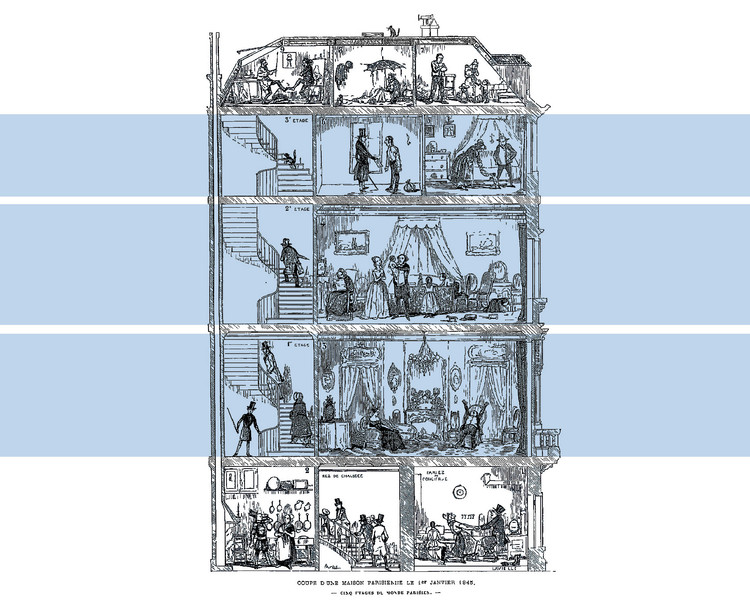 Back to Back Houses to the Garden Cities of England

As the industrial revolution led to a massive population flux toward the cities and an increasing number of lower-class workers, additional housing types were being created. While some of these early 19th century lodgings came about organically, others were active governmental and charitable efforts to allocate the growing numbers of poor workers.

On one hand the rich had moved into the multi-story townhouses, which boasted high ceilings and opulent eclectic style ornamentation. On the other, workers were often left squatting and taking over abandoned cottages, attics or were part of parish habitations either set up by the church or private initiatives through workhouses.

But one of the most popular types of housing were the Back-to-Back houses in the industrial towns of midland and north England. The adjoining string of houses (2 to 3 floors) suggested an interior model that was extremely small with single stacked rooms of less than 15sqm. They would typically have the kitchen and washroom on the ground floor and one to two bedrooms on the first floor. Sometimes they could even include a small attic and back yard. However, they didn’t have enough openings or windows, with only one exposed facade and “blind-backs”. Back-to-back houses could have housed multiple families in a single dwelling. As these dwellings were being constructed next to industries by workers themselves, many legislative attempts were made to prohibit their construction and they were finally banned in 1909.

The Garden Cities model was then suggested as a possible solution from the 1890s and on, offering a more singular, private, and throughout the model of living. In the Hampstead garden suburb, for instance, attention was given to creating a communal and neighborly feel between well-placed cottages, originally meant to mix all social classes. They were dreamt of as ideal communities. Openness between interior and exterior through private gardens and panoramic views were an added consideration that would provide comfort to inhabitants.

The Haussmannien Block: Vertical Living for a Modern Bourgeoisie

Paris, the biggest industrial city in the world in the mid-19th century, had seen its population double. Between 1853 and 1882, it became a Haussmannien city, for the modern bourgeois society. Modernizing, sanitizing, and improving living conditions and infrastructure, this transformation created, not only, but essentially, a specific spatial model, derived from the logic of the bourgeoisie.

The star plan grids of the Haussmannian networks generated particular triangular but also rectangular blocks. Divided into plots, the block looked as if it was one single building, mainly due to the association of identical elements. Every 3 or 4 plots, took on one square shape courtyard, a source of ventilation and lighting. In the same building, there was no combination of the living space of the bourgeoisie and the place of manufacturing. In fact, “in the Haussmannian city, the workplace was excluded from the private residential block”.

According to the book Urban Forms, the death and life of the urban block, although in the Haussmannien transformation “the sequence of internal spaces had been reduced, but a minimal hierarchy of places remained”. Regularly laid-out flats faced the street and were directly accessible from the foyer. The back of the plot, due to the geometry, permitted less well-planned units, without a double orientation.

Supporting the emergence of a new civil society, each building would put together several families from different social classes under the same roof. The 2nd floor took on a balcony and was reserved for the richest families. Apartments on the 3rd and 4th floor were destined for the petty bourgeoisie, while the 5th was saved for the lower classes, taking on a smaller balcony, for aesthetic reasons. The last floor, the “maid’s room” was for servants, with smaller rooms and shared water rooms. It had direct access to the kitchens of the apartments in the building, from a service staircase. On another hand, from the interior side, each apartment had a large antechamber leading into a corridor that serves the various adjoining rooms at the façade: dining room, living room, bedrooms, and the reception, while bathrooms were located on the inner courtyard side.

The Extension of Amsterdam: From Alcove Housing to Social Housing Blocks

From 1850 to 1920, although Amsterdam’s population grew by almost three times, the city did not increase in size. The modernization of the city started effectively when the North Sea canal was executed, and Kalf established the 1875 extension plan. Leaving building for developers, a clear contrast developed between the bourgeois neighborhoods and the working-class districts was established, especially with the introduction of “alcove housing” or very small houses of 20 square meters, one room per family, with bed cubicles in recesses in the kitchen. In some cases, the need for densification led to extreme measures, people were using all available spaces for housing including attics and cellars. At the end of the 19th century, a new type of multistory construction emerged, providing all the current functions: housing, trading and storing goods, commerce, and small-scale industry. Not paying attention to living conditions, the revolutiebouw, or revolution building phenomenon was born.

Michel de Klerk, the future leader of the Amsterdam School, started reflecting at that time on the crisis and drew up the plans for a block of social housing. A clear typological innovation, in the 1913–21 period, the block is no more conceived as an interchangeable unit, but developed into a more complex organization, ensuring the continuity of the tissue and allowing for the integration of different functions such as habitat, commerce, and infrastructure in order to generate diverse spaces. While the buildings on the streets respected the alignment, the courtyards at the back occupied the whole depth of the plot. The block had an internal space used collectively with its exits on the street through porches.

“Driven by a wish to give each working-class family an individual dwelling, the housing units reproduce to the greatest possible extent the characteristics of the traditional Dutch house with a ground floor directly open to the street, a small garden at the back and a room on the first floor”, according to the book Urban Forms, the death and life of the urban block. The center generated private backspaces for the ground-floor dwelling that collectively formed a courtyard, accessible from the street through a controlled passage. As the street façade made reference to the urban quality of architecture, narrow alternating projecting bays corresponded to the staircases and the kitchens, while wide bays, corresponded to balconies. Moreover, the living room, traditionally an open-plan, was indicated by a more important bay than the other rooms.

Finally, the development of Amsterdam was therefore founded on the principles of mass housing. Modern and progressive, the extension of the city, carried out between 1913 and 1934, did not defy the existing urban fabric, but experimented on the current urban block, exploring housing cells and their combination.

The Narkomfin built between 1928 -1930 by the architect and leading theoretician of Soviet Constructivism Moisei Ginzburg, is a transition-type Building. It was an attempt at transforming the individual into communal housing. It offered a well-conceived and intended comfortable standard of living with typical rooms and ample natural light through the continuous ribbon windows.

However, not all chambers had private amenities and were only meant for respose. The rest of the household functions were in most cases shared and spread throughout the five-floor building. This included bathrooms, kitchen, and other common areas. The Narkomfim plans suggest a very well structured and organized composition, offering abundant space for the communal settings and practical circulation to promote interactions between the cohabitants. All areas are delineated by the grid structural columns.

Although this experimental model might seem appealing to today’s users, it lacked the element of privacy and was often criticized for tight conditions and disputes over the use of the common areas.

This article is part of the ArchDaily Topic: Interior Wellbeing. Every month we explore a topic in-depth through articles, interviews, news, and projects. Learn more about our monthly topics. As always, at ArchDaily we welcome the contributions of our readers; if you want to submit an article or project, contact us.

Trump interview with Sean Hannity: The 35 most outrageous lines

European Super League on the brink of collapse after condemnation